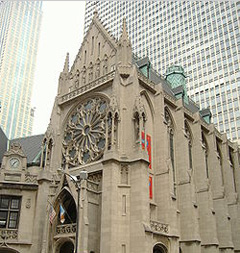 Richard Sbarbaro is Managing Partner of Trinity Executive Partnership and Chairman and CEO of Lauer, Sbarbaro Associates, Inc./EMA Partners, with offices in Chicago and New York. He serves on the Executive Committee of EMA Partners International, ranked in the top 25 global executive search firms, and is the primary contact for Hunt Scanlon’s Global 25.

As Managing Partner of TEP, he has directed over 480 executive search assignments for over 180 Catholic organizations nationally including primary/secondary schools, colleges and universities, hospitals and healthcare, orders and ministries, archdiocesan offices, societies, charities and services, conferences, and publishers. Under Mr. Sbarbaro’s direction, Trinity Executive Partnership has established a consulting partnership with Christian Brothers Services providing its broad array of services to CBS clients.

Combined, Mr. Sbarbaro has supervised and personally conducted over 2,000 senior-level search assignments including industrial, commercial, financial services, consulting, technology, healthcare and the academic/not-for-profit sector. In addition, he has conducted over 200 organizational reviews/ministry assessments, as well as compensation surveys and reports, management assessments and succession planning, and executive coaching and mentoring.

Prior to joining Lauer, Sbarbaro Associates, Mr. Sbarbaro was a principal with Booz, Allen and Hamilton and a Senior Vice President of the Midwest Stock Exchange and its subsidiaries located in Chicago.

Mr. Sbarbaro received a Bachelor of Science in Commerce and an MBA from DePaul University. He is a he recipient of the DePaul University Distinguished Alumni and the Beta Gamma Sigma Alumni Awards. At DePaul, he served as a member of the Graduate School of Management Advisory Council and has been an adjunct professor in the Graduate School of Business. He is also an active member of the Association of Executive Search Consultants and has served as a past executive committee member.